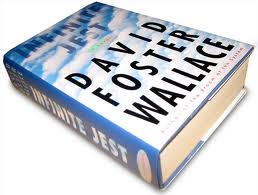 ”John Wayne, as do most Canadians, lifts one leg slightly to fart, like the fart was some kind of task…”

”Jim sir, say you’re playing out there, and suddenly you have to fart.”

”’But then you’ve denied yourself an urgent fart, and you’re running around trying to compete with a terrible hot nasty uncomfortable fart riding around the court inside you.'”

”And C turned lightblue and bit thru the snakes’ head and died for keeps and shit pants instantly with shit so bad the hot air blowergate is blowing small bits of fart and blood and missty shit up into our maps and Poor Tony backs offof over C and puts his hands over his madeup map and looks at C thru his fingers.”

”It’s my fault, Jim, home so much, limping around, ruined knees, overweight, under the Influence, burping, nonslim, sweat-socked in that broiler of a trailer, burping, farting, frustrated, miserable, knocking lamps over, overshooting my reach.”

”Doony Glynn’s been observed telling Burt F.S. things like that there’s some new guy coming into the Disabled Room off Pat’s office with Burt F.S. who’s without not only hands and feet but arms and legs and even a head and who communicates by farting in Morris Code.”

”Somebody has farted; no one knows just who, but this isn’t like a normal adult place where everybody coolly pretends a fart didn’t happen…”

”…by late July everybody else’s attitude toward Clipperton resembled that kind of stiffly conspicuous nonrecognition that e.g. accompanies farts as formal functions.”

”Marathe farted mildly into his cushion, nodding as if with thought.”

”…and the train crosses in front of the bus with a blast of its farty-sounding horn and what Gately sees as a kind of swagger to its jiggle on the street-level track.”

”…Day was downstairs with Ewell and Erdedy telling each other their windbagathon stories, lying on Day’s mattress with his shoes on and trying to fart into the mattress as much as possible…”

”Lenz is not asleep but is wearing personal-stereo headphones, plus a jock strap, doing handstandpushups up against the wall by Geoffrey Day’s rack, his bottom only inches from Day’s pillow and farting in rhythm to the pushups’ downstrokes…”

”If somebody farted, speak up.”

”It’s too powerful for a fart.”

”I don’t even think any kind of mammal could fart that bad, Chu.”

”… — the girl stops trying to dicky the lock of the sacramental-wine cabinet, stops farting on purpose during matins and vespers…”

”The tow truck tends to diesel and chuff after deignition, finally subsiding with a shuddering fart.”

”I needed to fart but had not so far farted.”

”I farted, but it didn’t produce a noise.”

”There were fart-accusations and -denials.”

”Tell him who gives a bright flaming fart!”

”The machine diesels a little and farts some blue smoke.”

”The Viking raised one leg to fart toward Pemulis in a vaudevillian way, getting a laugh from Csikszentmithalyi and Rader…”